Today’s quilt was inspired by one I made awhile back using a layer cake.  It was made with a technique where you stack 4 squares, cut horizontally, cut vertically and shuffle so you end up with four different fabrics in each block.  The quilt I made had narrow sashing strips between the rectangles in the block which made it look more complicated than it actually was.  I was thinking about doing the same thing with charm squares but decided it would be way too putzy with 5” blocks.  Then I realized I could get the same effect by modifying a Disappearing Nine Patch to include sashing between the charm squares in the nine patch. 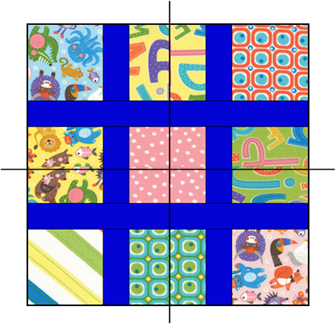 I made five of these blocks for my quilt.  That meant I needed 45 charm squares.  Each pack has only 42 so I bought an extra fat quarter and cut three additional squares from it.  The sashing strips are cut 2” wide.  After the block is sewn together, simply cut it in half in both directions as shown by the lines.  Most tutorials for Disappearing Nine Patch have you rotate the cut squares and sew them back together to make a block.  Don’t do that for this quilt.  After cutting all five of the nine patch blocks in quarters, you will have 20 squares.

Arrange the squares into five rows of four blocks each.  Rotate the blocks so the seams go in different directions.  Without borders this will measure about 32” x 40”.  I wanted a little bigger quilt, so I added borders.  The inner border was cut 2” (finished size 1-1/2”) and the outer border was cut 3-1/2” wide (finished size 3”).

In addition to the 45 charm squares you will need about a yard of the sashing fabric (includes inner border), 1/2 yard of outer border fabric and 1/2 yard for binding. 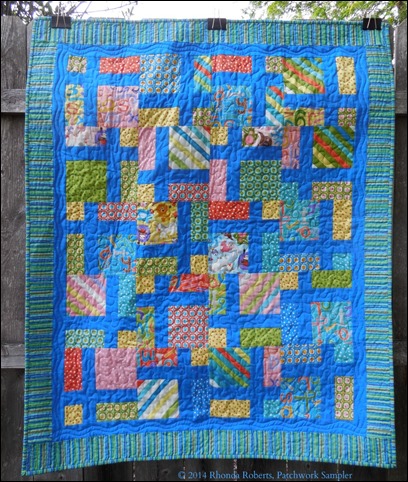 The quilting is just an overall meander in the center with wavy lines in the inner border and “up and down” lines in the outer border.

Be sure to stop in tomorrow for Baby Quilt #4! 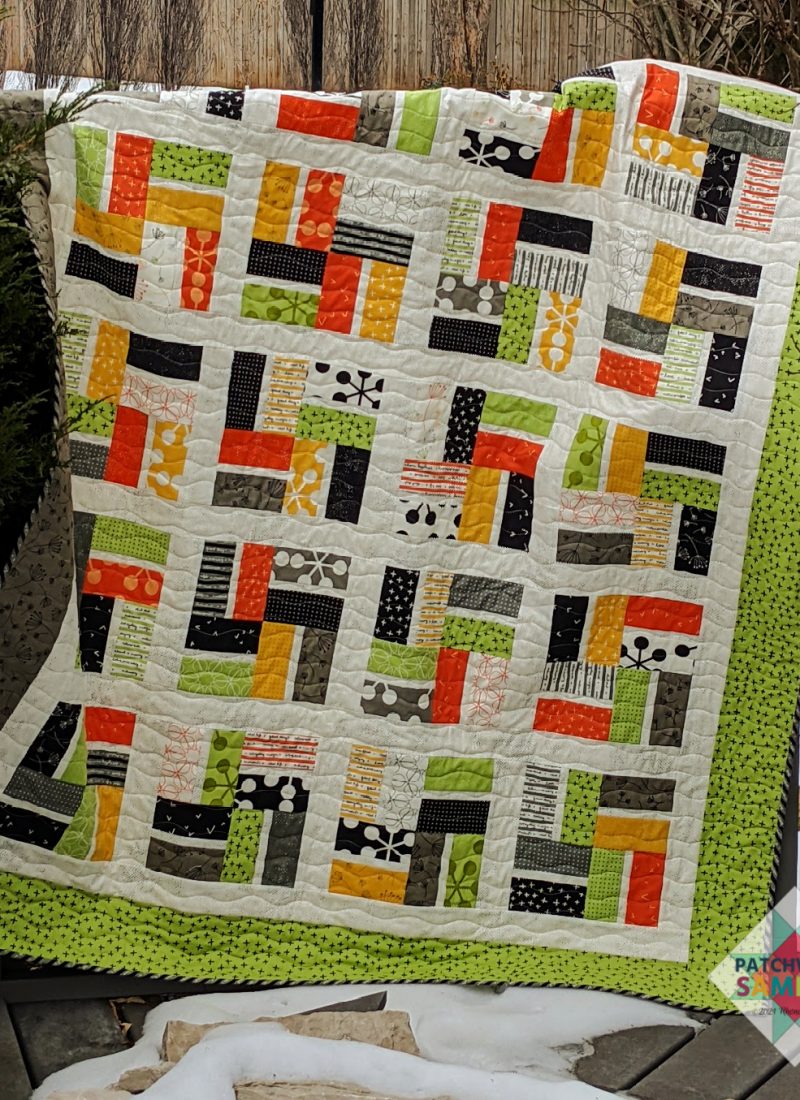 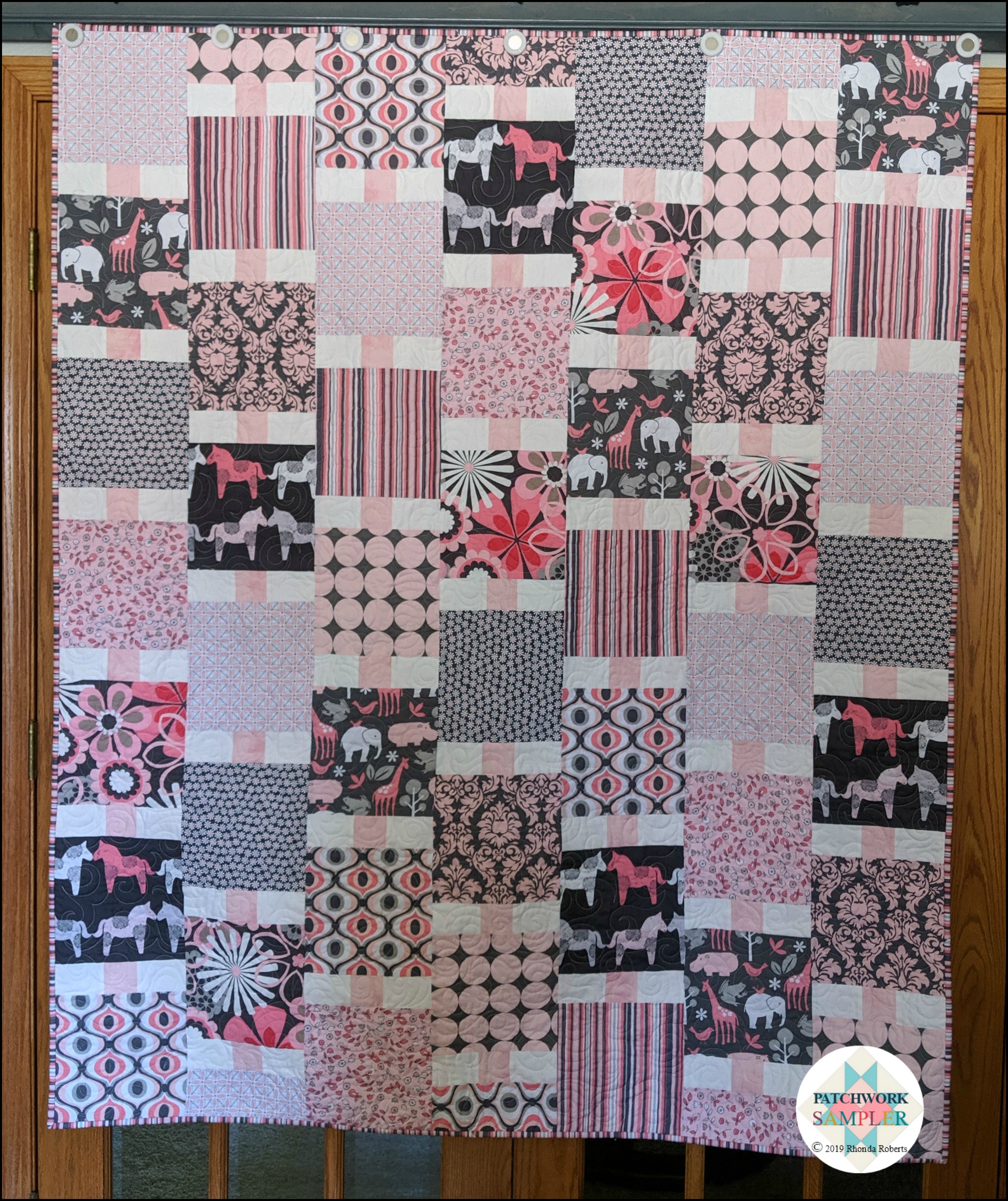 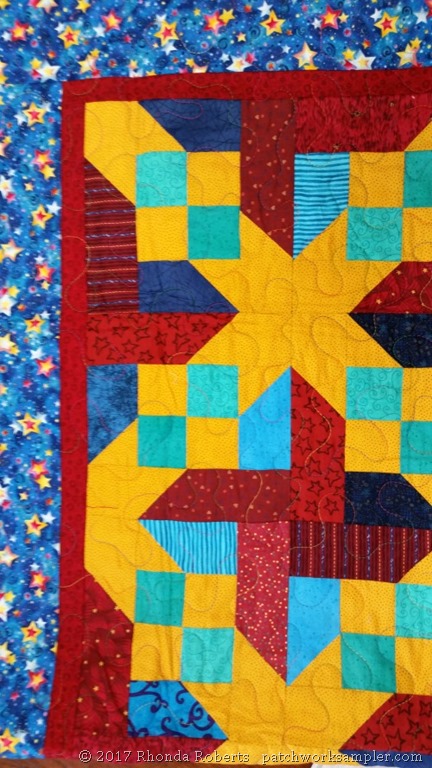 One Monthly Goal: 10 and Done