I’ve been collecting the block patterns for the Women of the Bible quilt for awhile.  I really like these patterns because they offer a little Bible lesson in addition to the block instructions.  There is also space for personal reflection so you end up with a journal to document your quilt.

As I was digging through my scrap bin the other day I had this block in the back of my mind and found three fabrics that would work for the first block, appropriately named Eve. It finishes 15” square so it took some searching to find scraps large enough but once I found them it just took a few minutes to cut and sew the block together.  I used the Omni 98L ruler to make the quarter square triangles so I could get by with narrower strips of fabric than the pattern called for.  It worked even better because the stripes in the plaid went in the same direction by cutting the triangles from a strip.  If I had cut a large square into quarters on the diagonal, the stripes would have run both horizontal and vertical.  It’s so nice when things work out like that! 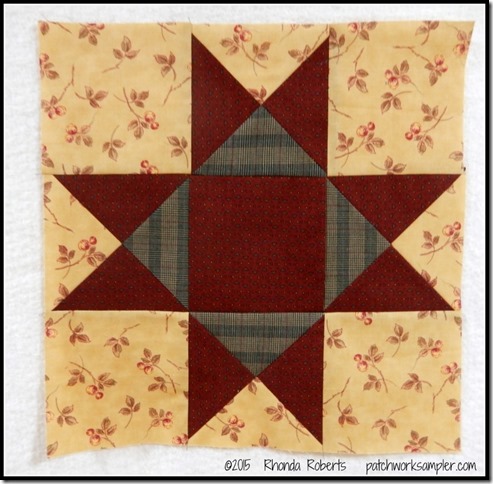 This is a big quilt-110” x 125”—so it’s going to take some time to accumulate all the blocks.  The quilt is designed by Stitchin’ Tree Quilts and is being provided as a free block of the week by several shops.  Typically a block is only free for two weeks but there is a CD available for purchase that has all the block patterns if you want them all at once. I get newsletters from Little Quilts and Quilt N Bee and they are both doing this so check it out if you would like to make a Women of the Bible quilt for yourself.

Stitchin’ Tree Quilts has just started a new block series called Have A Little Faith.  Be sure to take a look at that too if you like making sampler quilts.  It’s a great way to use some of your scraps!