When I set Celtic Solstice as my July OMG (One Monthly Goal) I knew it would be a challenge.  This has been a summer of travel and we have been home only a few days in July.  I made the most of those days though and finished this quilt just under the wire. 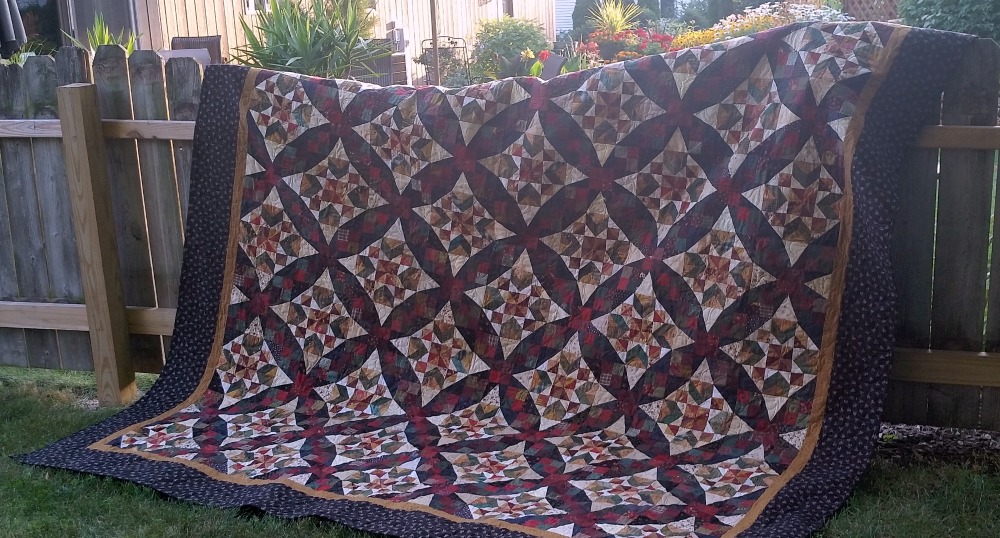 The pattern is by Bonnie K. Hunter of Quiltville.com and is available here. It was started way back in November 2013 when Bonnie offered it as her annual mystery quilt. During the mystery I kept up with piecing the units pretty well but it fell by the wayside after the blocks were finished.  That frequently happens around here.  For me the fun is in choosing the fabric then piecing the blocks to see how the pattern and colors come together.  Once I see that, I kind of lose motivation in the finishing process.

The original Celtic Solstice pattern features a pieced border but I ended up not using it on my quilt.  After piecing all the border units I sewed one side onto the quilt and all I could see was the border.  My eyes were immediately drawn to the outside of the quilt and the intricate piecing in the center was lost.  Maybe the colors weren’t right or maybe it would have looked better after the outer border, but I couldn’t get past that and ended up with slab borders.  I’m really happy with the quilt now so that’s all that matters.  Now I just need to develop a plan for that giant stack of  black and red tri-recs units!  I have an idea but it may take a month or two to bring it to fruition.

Head over to Elm Street Quilts to see what other bloggers finished this month. Then stop back later in the week to check out the August goals!