I got up really early this morning and was very energetic—just ready to jump right in and get busy with all the work that needs to be done.  The wedding is now only eleven days away and I still have a few dozens of projects I want to do between now and then.  We’re expecting about 60 people from out of town and I know many of them will be stopping by over the weekend.  Many of them have never been here so of course I want everything to be nice.  Anyway I started out with a bang, getting a little ironing finished then moving on to piecing a new quilt top.  I worked for awhile and got quite a bit done on the quilt.  It has 18” blocks and only 7 pieces per block so it is very quick and easy!  Here’s one of the pieced blocks. 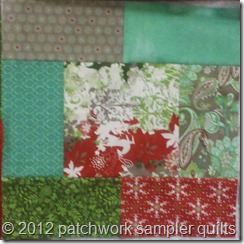 After Jim left for work I rode my bike then did some routine cleaning and finished piecing the quilt blocks.  I had them placed on the design wall all ready to sew together later in the afternoon.  Then I jumped right in painting the master bathroom.  This is a project I’ve procrastinated for months.  I’ve had the paint (same color as the bedroom) but hadn’t felt pressured enough to get it done until now.  Just the other day my neighbor and I were discussing painting projects and she mentioned that a decorator friend of hers recommends painting the ceiling the same color as the walls.  That was a light bulb moment for sure. It would be SOOO much easier not having to worry about wall paint on the ceiling and vice versa. It was going beautifully until I ran out of paint.  Guess I used quite a bit more painting the ceiling!  Luckily Home Depot is only 5 minutes away so I ran out to get another gallon of paint. When I got home I discovered the power was out.  A few minutes later someone from the power company came and said the transformer had blown.  What??  That had happened on New Year’s Eve just a couple of years ago.  They sent a little crane, crew and a new, improved, more powerful transformer and we should be back in business in a few hours. Here’s the scene in my backyard.

Until that happens there will be no cleaning, no painting and no sewing. 🙁

Off to a trying start