This week has been kind of a letdown after last weekend’s marathon sewing session. Bryan and I made a quick trip to St. Louis on Monday and Tuesday. He had an medical school interview with St. Louis University. When we left home on Monday morning it was 44 degrees outside. By the time we got to St. Louis it was 94! It was hot and muggy both days we were there and I’d brought the wrong clothes for the weather. We survived, though, and the interview went well. While he was at the university I visited Forest Park. I had a nice walk and spent a little time at the zoo. I’d brought bindings to hand sew but it was just too hot to work on quilts so I didn’t do any sewing while we were gone.

When we got back home I pieced a quick and easy quilt top from Westminster’s Leanika fabric line. It turned out pretty well. I had a fat quarter collection of this fabric and only used half of them so I think I’ll make another one using the same pattern. There was only one (okay, maybe two) fabrics in the collection that I really liked so I just want to use it up. I pieced another “Spicy Spiral Table Runner” and have another one cut and ready to stitch together. I ordered a layer cake of Moda’s new line called “Bliss.” Then I saw the Moda Bake Shop pattern called “Blissful Confection” so I pieced that on Thursday. Here’s the link for “Blissful Confection” if you’d like to make one for yourself: http://www.modabakeshop.com/2010/09/blissful-confection.html. After all this piecing I needed to start quilting so I could get some things finished so on Friday I got up early and quilted an old UFO called Grandpa’s Best. I’d had this quilt cut out since about 2003 so it was nice to make some progress on it.

Last Saturday my clothes dryer quit heating up. I had a service appointment scheduled for Friday morning between 8 and 11. I didn’t want to work downstairs in my studio because I didn’t want to miss the doorbell so I decided to work in the dining room upstairs. I brought up a bunch of quilts that needed binding and got to work. Eleven o’clock came and went with no service technician, but I did have binding machine sewn onto two quilts. At 12:30 with another binding complete, I called and left a message to see if they were still coming. They didn’t return my call and I called back at 2:00 (after another binding) and finally talked to someone. They said the technician had called here and got no answer so he didn’t bother coming. WHAT?? In the first place, I hadn’t made an appointment for a phone call, I’d made an appointment for a technician to come to my house and fix my dryer. Secondly, I had been sitting right by the phone all day and had received no call. My caller ID confirmed this so I was really angry that they hadn’t followed up or made a reasonable effort to make this service call. I decided they really didn’t need the business if they didn’t try any harder than that so declined an offer to reschedule (also my laundry was piling up and I didn’t want to go to the laundromat). I then called another service company and they had someone at my house an hour later. By the time he had it fixed I had finished by fifth binding of the day. It seemed like I had wasted my day sitting here waiting but I ended up accomplishing quite a bit so it turned out okay. Now I have lots of binding to hand sew while I watch football and movies!

This morning I got up and jumped right in with it and finished a binding I had started last week while I watched the movie “Whip It.” It was an okay movie that didn’t require a lot of focus to follow along–just the thing to watch while sewing. This quilt is “Crossed Rails.” Basically you make rail fence blocks, cut them in half on the diagonal and sew them back together. I sewed it together with sashing and cornerstones and really like how it turned out. It was made completely from stash. Here is a picture of the finished quilt. 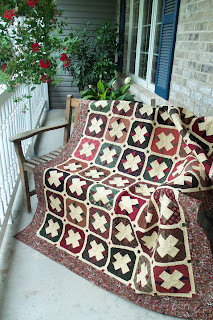 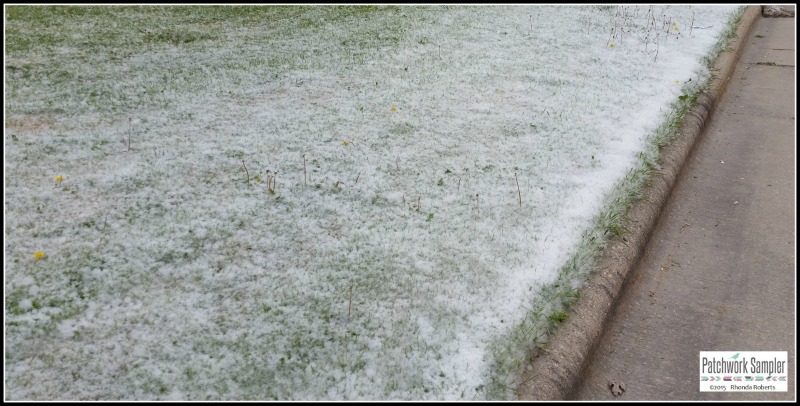