The busy summer has not been conducive to productivity in the sewing room. So far, it’s not slowing down, but there may be hope on the horizon. Mostly I stick to quilting on the blog but I’m digressing a bit so show a couple of personal points of interest.

Each year my son and daughter-in-law take an anniversary picture. They feature an event from the year and also hold the picture from the previous year so they end up with a picture in a picture in picture and so on. They recently purchased their first house and it is the highlighted event this year. Jim and I went over for the photo shoot. Jim takes the picture while I have the much harder job of getting the dogs’ attention and trying to get them to look somewhere near the camera. It takes about 50 shots to get a decent one.

I don’t know which one they will have framed, but I thought this one is good. Their two rambunctious Dalmations are the stars of the show. They are such sweet dogs. 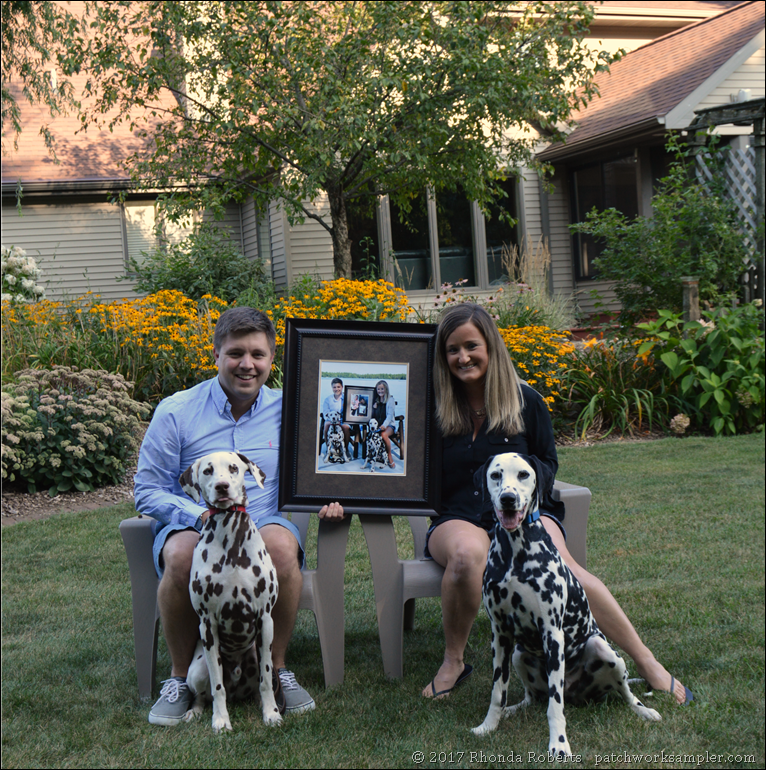 This past weekend one of our daughter’s good friends got married. Since 8th grade, Jen has been one in a group of eight amazing friends. In high school they were known as the Crazy Eights and they have turned into very accomplished young women. It has been fun to watch each of them choose a career path and become successful. If every high school girl had the bonds of friendship that these girls have, it would be a different world. They supported each other through high school drama, the fun and demanding college years and dozens of dates and boyfriends, yet still remain very close. Six of the eight were able to attend the wedding and it was fun catching up with them. It is a little bittersweet seeing them grown up and getting married. Here they are with the lucky groom (Jen is third from the left). All are incredibly beautiful women, inside and out! 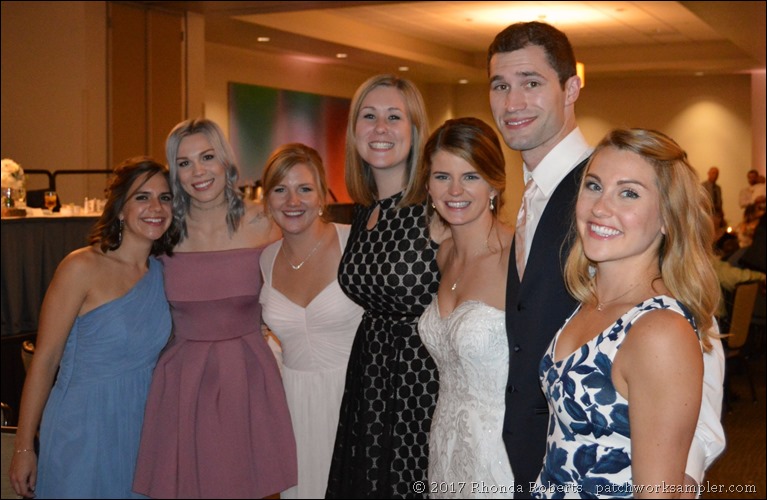 Not only are the eight girls friends, but their eight moms are too! Even though all but one of the daughters have moved out of town, the moms still try to get together two or three times a year. It was awesome that all eight of us were at the wedding. We had a great time! 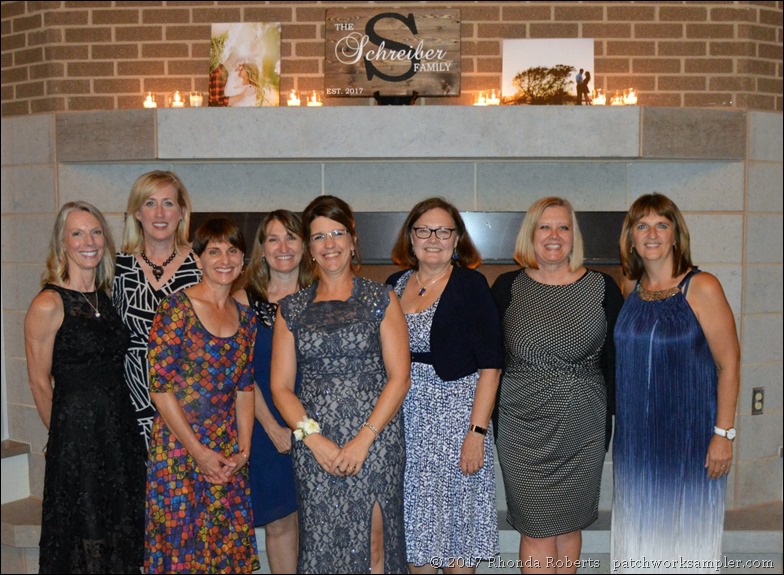 Okay, back to Points of Interest of the sewing variety. I’m trying to be better about not creating a bunch of new UFOs. Abandoning the project midway, dramatically increases the chances of losing parts, momentum or interest. Right not, the projects from my recent retreat are corralled in a laundry basket in my sewing room and I want to finish them before they are relegated to a closed bin. Once they suffer that fate, it could be years before they see they light of day.

I was going gung ho on Points of Interest before I setting it aside to finish City Sampler. This will be a quilt for Jen’s old room so I do have a plan for it. I’m making it bigger than the pattern so it fits nicely on the bed.  All 49 blocks are complete and I’m working on the sashing units. This quilt has an interesting setting. It almost looks like it’s on point, but it’s straight set and the sashing units make the alternate blocks. Much easier than on point but still a lot of sewing. My goal is to have the center top completed this week. It has a pieced border (even more tri-recs units!) and I know I won’t get that finished but it will be nice progress to finish the center. 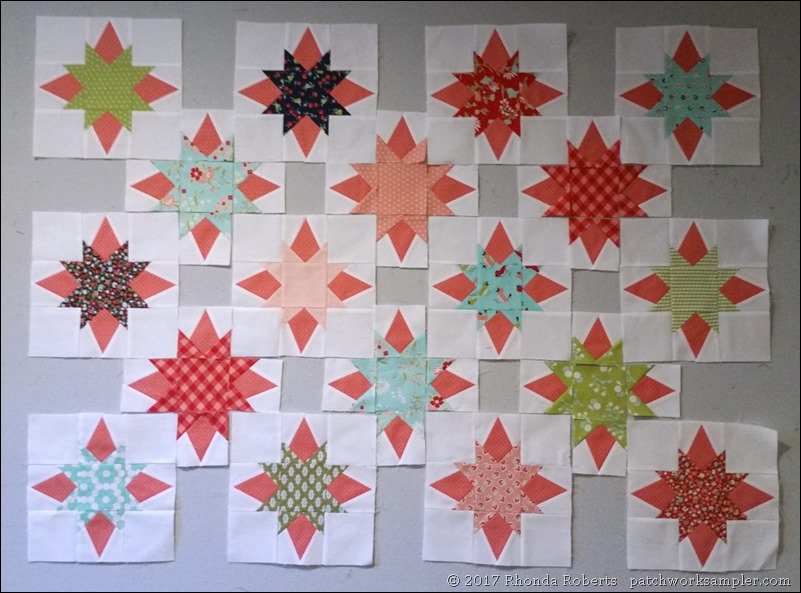 In July, my One Monthly Goal was to finish Celtic Solstice. I had a hard time finding it and had to search through several bins. In the process I found one of those coffin-sized Rubbermaids filled with unquilted tops. Most of them are even layered with batting and backing. It would be nice to work through those quilts and get them donated. This looks like an old Thimbleberries Club project and is quilted except for the borders. I will quilt something in the flowerpots too so they don’t poof out after the quilt has been washed. My second of only two goals for the week is to finish the quilting and get this bound. 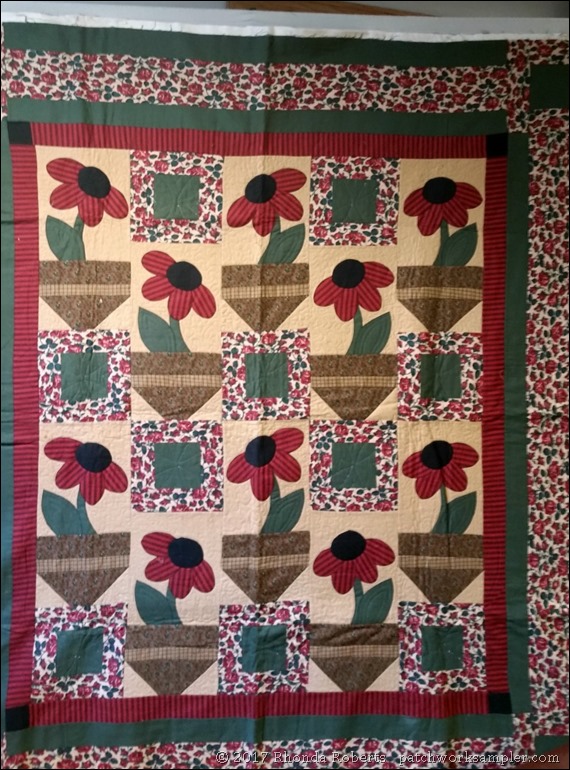 These are reasonable goals since we will be travelling later in the week. If I finish the quilting on the flowerpot quilt I can hand sew the binding in the car. 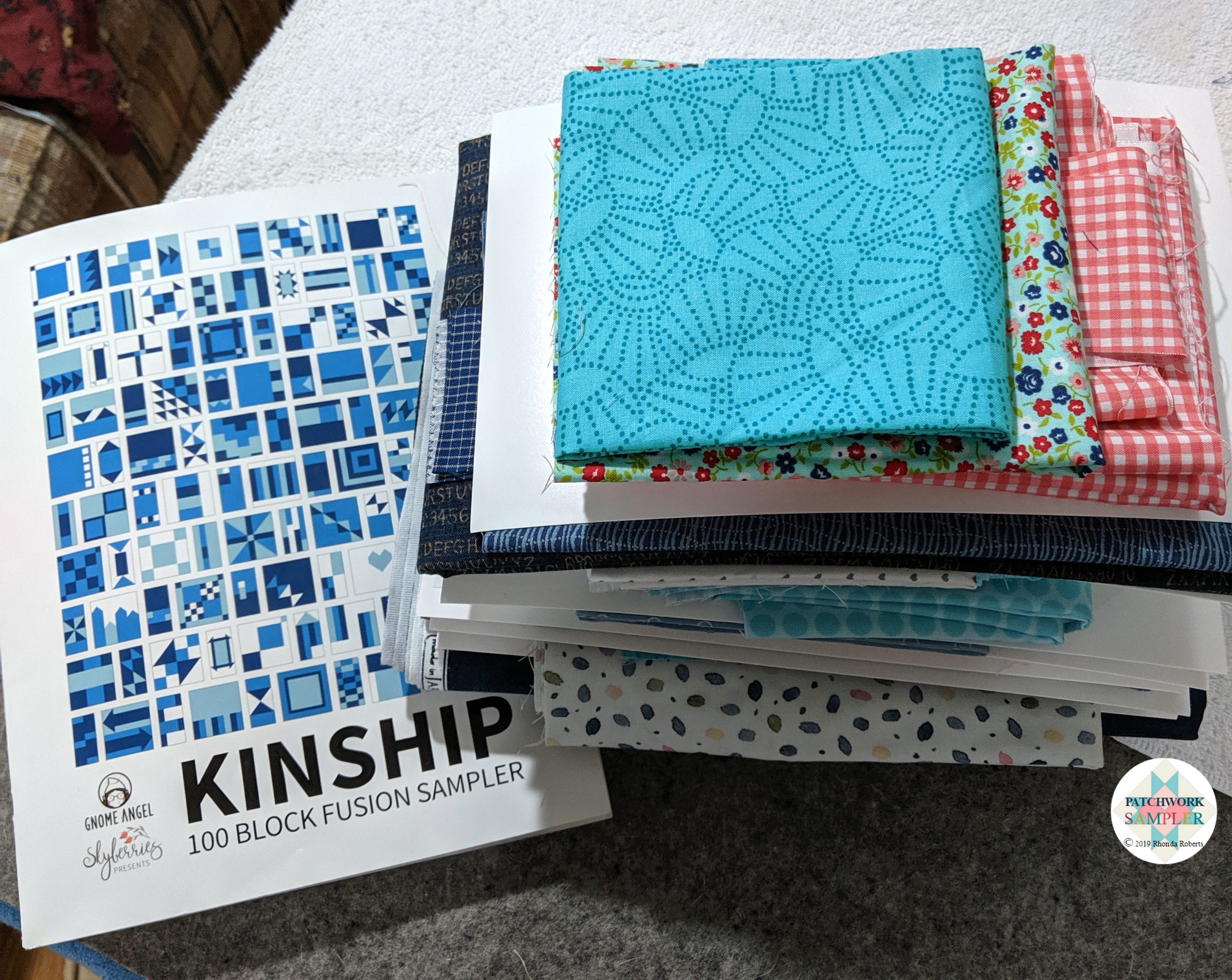 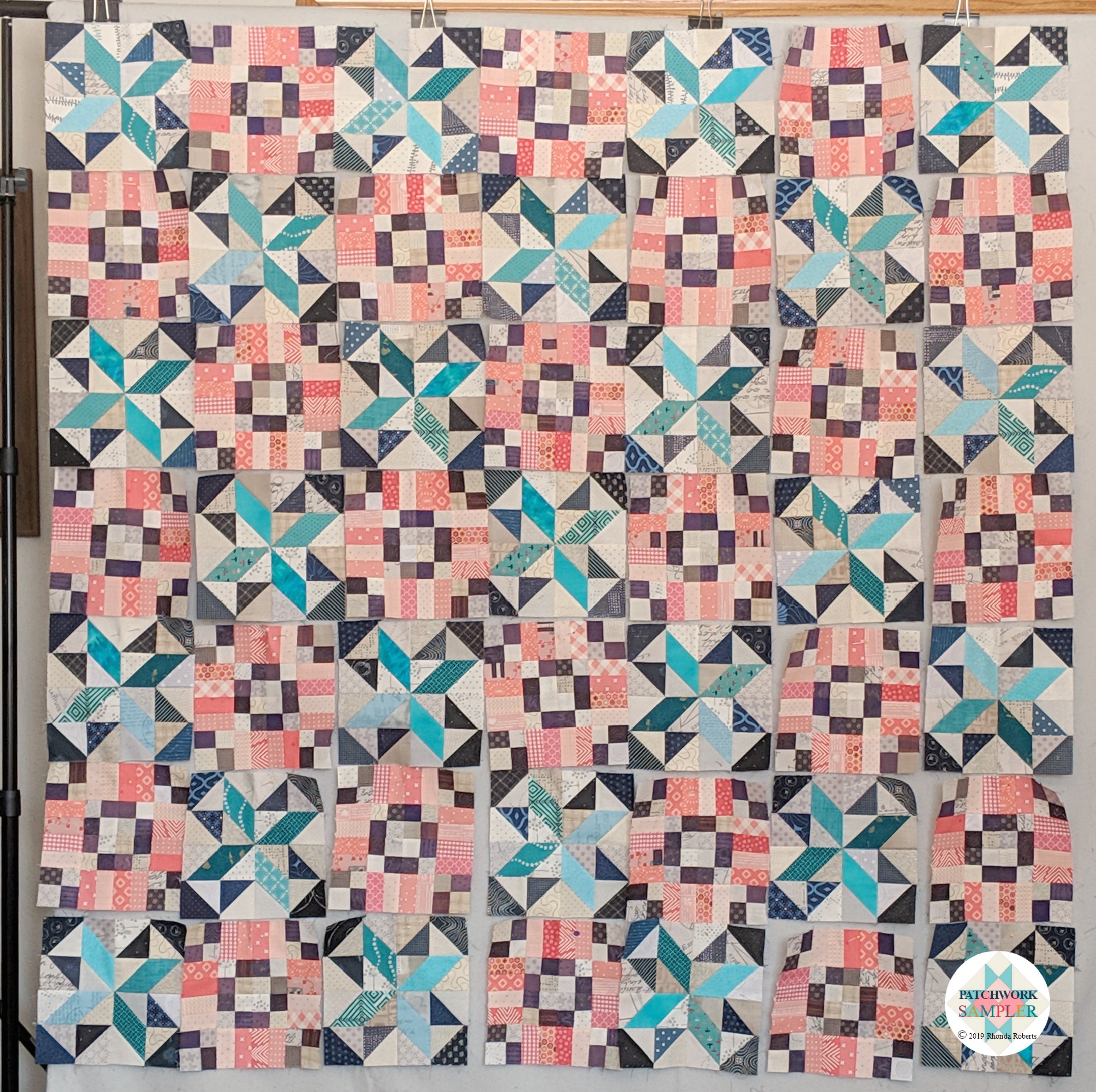 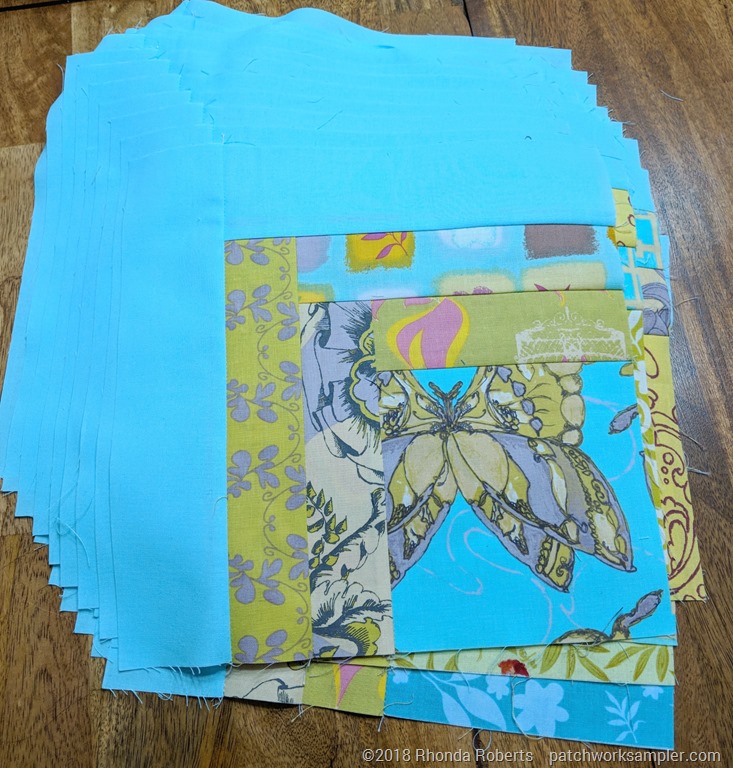