This is the quilt Jen made on our retreat weekend a couple of weeks ago. She saw this on Pinterest awhile back and decided she wanted it for her bed. It took a lot of effort to find a print she liked for the alternate blocks. I haven’t shopped for fabric in quite awhile, but I haven’t seen any nice florals in a long time. The print we found is rayon, but there wasn’t anything that was even a close second, so we went ahead and used it. She didn’t have any trouble sewing with it and it will end up being very soft and drapey, so I think it will work out fine. She did a nice job on this.  It was the first time she had made flying geese units and all her points and corners look good! 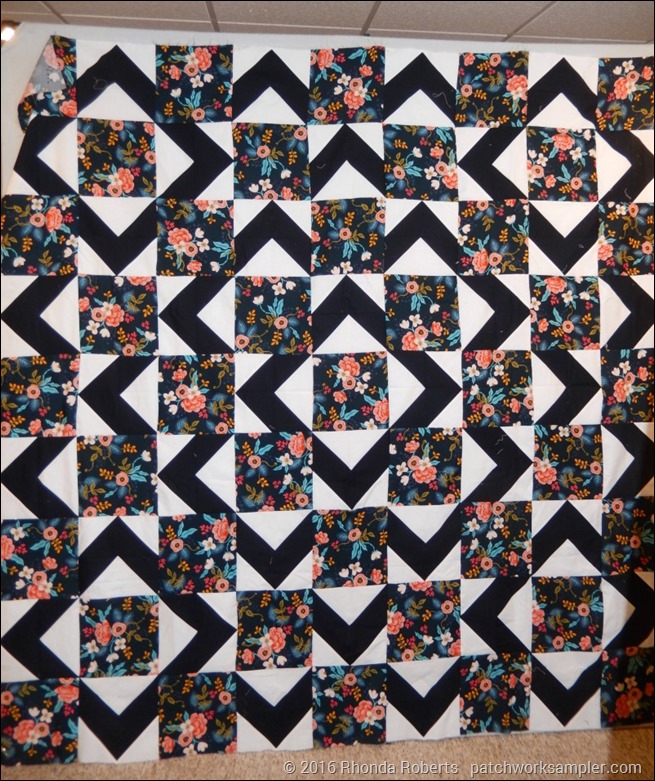 Of course, I had hoped to finish it before she came home for Thanksgiving last week, but it didn’t happen.  The borders are cut and I’ll try to sew them on tomorrow, then load it on the frame. It will be a busy weekend though with a wedding near Madison on Saturday, then a 40th anniversary party for some friends of ours in Chicago on Sunday.  First thing Monday, though, I’ll be ready to go! One good thing; Jen does not like quilts with heavy quilting because they are too stiff, so I’ll quilt this with an easy, open design which should go pretty fast.