About 10:00 yesterday morning Jim decided he’d like to go down to Milwaukee and do a little biking.  I say “little biking” because that’s all I can do.  Jim just loves to bike and could go all day but my back and neck always start hurting so it’s not that fun for me.  We met up with Bryan and Laura and they took us to Northern Brewer so we could check it out.  He’s really gotten into home brewing beer and he’s trying to get Jim interested.  It was fun to see all that goes into brewing and I have to say that Bryan has brewed some good beer.

After that we picked up the Oak Leaf Trail in Wauwatosa and rode to Miller Park.  We got there right before the Brewers game so the whole area was really busy with tailgaters.  The burgers and brats smelled SO good but we rode on and picked up the Hank Aaron State Trail at the park. 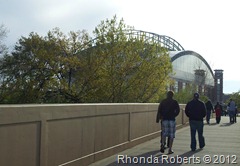 The Hank Aaron trail runs along the Menomonee River behind Miller Park so it’s pretty along that part of the trail.

After the ride we had a quick dinner at the Chancery, then headed home.  It was a nice day.

This afternoon we were back on our bikes and rode the Wiouwash trail from Neenah to Oshkosh.  Two of my favorite words are “abundant sunshine.” and it was a wonderfully sunny weekend so it was nice to get outside.  Now if it would just warm up a little bit.  It was cruel to have temps in the 70’s in March.  Now the 50 degree days seem cold!!

After dinner I went downstairs and worked on a few more log cabin blocks.  I’m working on a very scrappy variation and it’s been really fun.  I have a drawer with 1-1/2” strips and just grabbed a bunch of them and started cutting.  The fun part has been coordinating the rounds in each block.  As I’ve sewn these blocks, I’ve been thinking about several other variations of this pattern I’d like to make.  The next ones will be more planned and one of them might even use the gradations I hand-dyed several years ago.  It would be great to use those fabrics.  First I need to finish this one!  Only a few more blocks to sew then I can put the top together.  Here are a few of my blocks.